The team visited two locations, spending one week in Valparaiso followed by one week in Iquique. 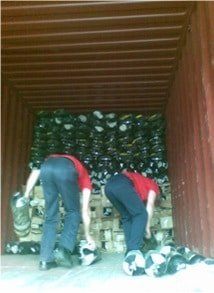 A container of equipment was sent to Iquique in 2012.  The costs of shipping were met in full by the Chilean firefighters.  The 20’ container left our Stockport stores on 15th August 2012 and arrived in Iquique, Chile on 24 September 2012.

The container of equipment was shipped to Iquique from where the contents were shipped throughout the region and beyond.  The intention was to share the equipment between the cities and regions of Iquique and Valparaiso.  In addition to the equipment shipped out volunteers took with them two automatic defibrillators and a training defibrillator.  These items were donated to 11 Company Valparaiso and training given to 4 firefighters on the use of the defibrillators and the training defibrillator.  Simon Picton (an Operation Florian volunteer) took a surprisingly large amount of BA servicing tools and manuals etc, in his luggage allowance!  Simon ran a BA servicing and maintenance course to a small group of firefighters in both Valparaiso and in Iquique.

Training in Breathing Apparatus procedures and fire science was given on the fire station in the evenings with ad hoc training during the day.  Many firefighters from other stations were able to attend although numbers were depleted at times due to operational requirements.  Practical BA sessions were held in Laguna Verde and some firefighters from 12th Company, Santiago, were able to participate.

Breathing Apparatus maintenance training was given during the daytime and in the evenings with dedicated students.

Training in Breathing Apparatus procedures was given on the fire station in the evening with ad hoc training during the day, additional sessions were held during the daytime at weekends as firefighters had travelled from outlying regions of Chile (some for 12 hours and more by road!).  Other stations were invited to attend and many firefighters from other stations were able to attend although numbers were depleted at times due to operational requirements.  Practical Breathing Apparatus (BA) sessions were held utilising an American designed ‘fire container’; some firefighters from other companies were able to participate.

The final evening session was a presentation and discussion on ‘incident management and control’.  Representatives of all fire stations (companies) of Iquique attended this event together with senior officers from Iquique fire service Headquarters.

The visit was a two-way learning event with the Operation Florian members learning much from our Chilean counterparts culturally, academically and practically.