Several UK aid donations and initiatives have delivered in Ukraine since 2012 by FIRE AID members. FIRE AID Committee Member Mike Pitney of Kent Fire and Rescue Service has been traveling to Ukraine since 2012, building relationships with firefighters in the Zhytomyr region in the northern part of the country – an area highly affected by the Chernobyl disaster.  A summary can be found here: 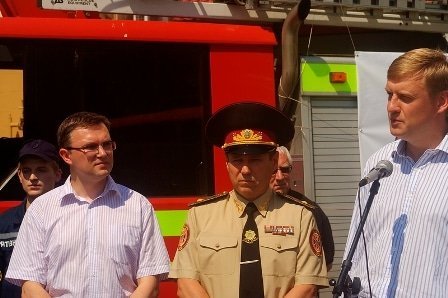 In July 2012, supported by EASST and by local donations, Mike Pitney led a group of eight fire fighters from Kent Fire and Rescue Service to officially donate much-needed vehicles, fire suits and equipment to the town of Korosten in the Zhytomyr oblast. This has enabled earlier intervention in house fires and has now made extrication possible during road traffic collisions – something that was previously impossible for this station. Emma MacLennan, Director of EASST, underlined the importance of this. “In Ukraine 78% of road casualties die at the scene of a crash, compared to less than one-third in the UK. Both training and equipment are inadequate. We are working to end this needless loss of life.” Read More A video of the donated equipment in action is viewable on YouTube

After annual visits to take equipment to further improve the fire service’s capability, it was in 2015 that Mike discovered that fire crews in Korosten are now being called to large scale incidents thanks to the equipment and training provided – a widespread forest fire occurred towards the Chernobyl exclusion zone and the crews from Korosten were mobilised to respond despite being some distance away. The reason being that their improved response times (due to the UK donated fire engines) and enhanced capability (due to training, clothing and equipment) means that they are best equipped to reduce the loss of life and respond effectively. The crew managed to work at the fire for 2 days and stop its development in an area of Ukraine that could have triggered a humanitarian and ecological disaster.

2015-2016
During 2015-16, Mike and EASST are now working with the Lviv Institute for Fire Safety to develop their road safety training for firefighters and partnership working between emergency services. Read More.

Feature on the 500 Ways website recognising the role of volunteers: http://500ways.org/2015/08/25/aiding-fellow-firefighters-in-ukraine/