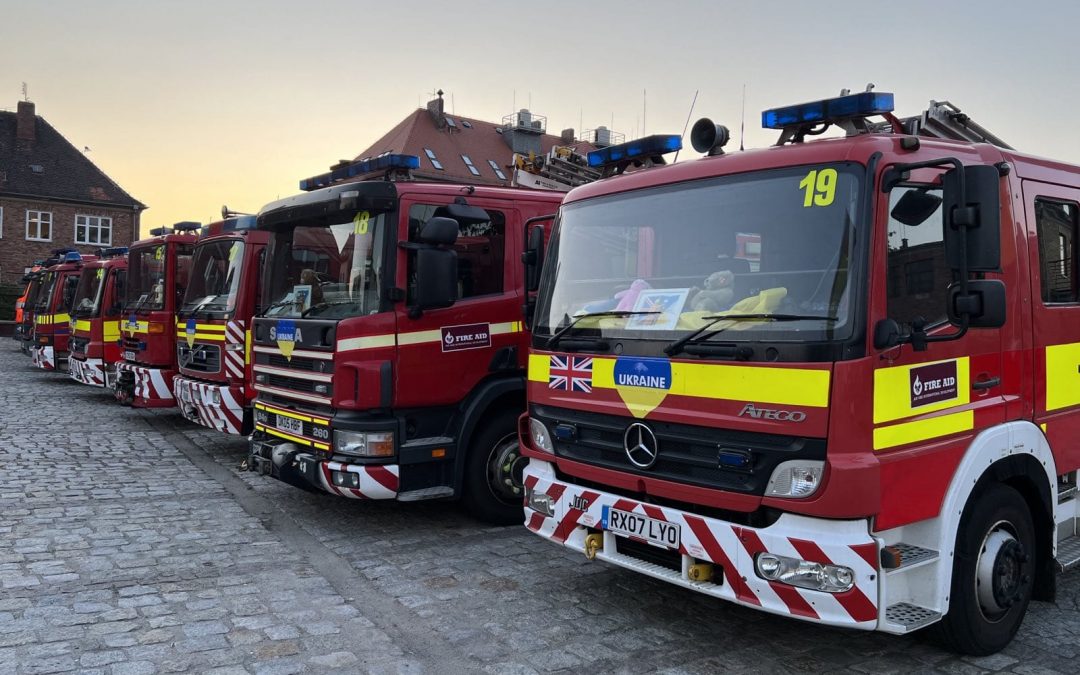 In response to the invasion of Ukraine, FIRE AID in partnership with UK Fire and Rescue Services have donated over 60 decommissioned fire and rescue vehicles and more than 10,000 items of equipment, kit, and PPE to support rescue workers on the frontline.

This relief effort has been led by FIRE AID and the National Fire Chiefs Council (NFCC), with support from the UK Home Office, the Eastern Alliance for Safe and Sustainable Transport (EASST), the FIA Foundation and the Fire Industry Association.

FIRE AID has formed strong ties over the last decade with the Ukrainian State Emergency Services and Impact NGO Ukraine. Delivering 16 fire and rescue vehicles and 10 training programmes during this time.

When news of the invasion broke, FIRE AID and its team of volunteers knew they had to respond. “From the moment the Russian invasion began I knew I had to use the knowledge and skills I’d learnt over the last 10 years to lead a response and provide the support so desperately needed on the ground,” said Mike Pitney of Kent Fire and Rescue, FIRE AID volunteer and convoy leader. 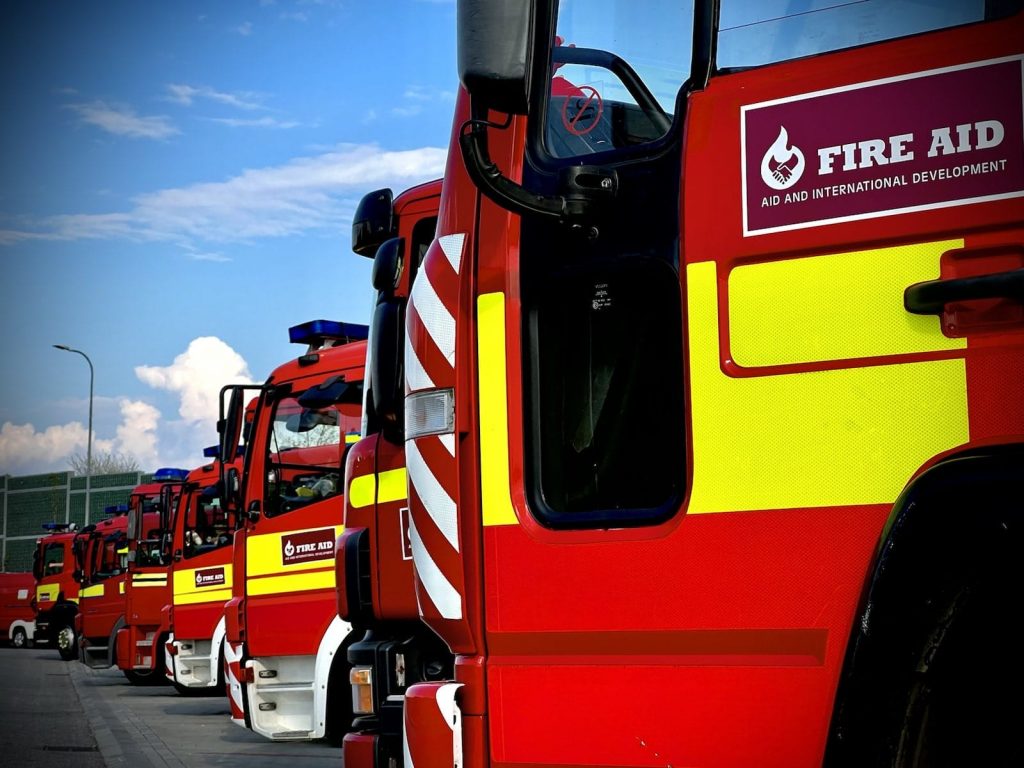 Within days, it was clear that there was a great need for emergency response and rescue equipment across Ukraine. FIRE AID were in a unique position to gather up-to-date information on the fire services immediate needs and feed this to the NFCC to ensure the equipment requests that were sent to all UK fire and rescue services were relevant and useful to the Ukrainians.

A collaborative effort involving every fire and rescue service in the country as well as industry partners such as Angloco and MSA Safety alongside local charities, prepared the first convoy of donated kit. Convoy one included 15 fire engines, an incident response unit, a hydraulic rescue platform, and two lorries containing equipment such as thermal imaging cameras, generators, lighting, hoses, and thousands of sets of PPE. Every item donated was either decommissioned or surplus to requirements but still operational.

The UK International Search and Rescue Team also played a key role, stepping up to pack the vehicles and ensure all kit was in good working order as well as checking the inventory was up to date and would meet the needs on the ground. The wider fire sector – including MSA Safety, Fire Sector Federation, the Fire and Rescue Suppliers Council and the Fire Industry Association and Angloco– also provided invaluable support, offering both kit and personnel to support the project.

More than 60 volunteers from FIRE AID and fire and rescue services across the UK took part, bringing together FIRE AID member organisations, Kent FRS, SESHAA, EASST and Operation Florian. The convoy travelled over 1,000 miles across Europe to Poland. Once the convoy arrived, Polish and Ukrainian firefighters were trained to use the equipment and it was taken across the border and officially received by the Ukrainian State Emergency Services (SES), Impact NGO, and the Deputy Ministry of Interior in Lviv just five weeks after the war had started. 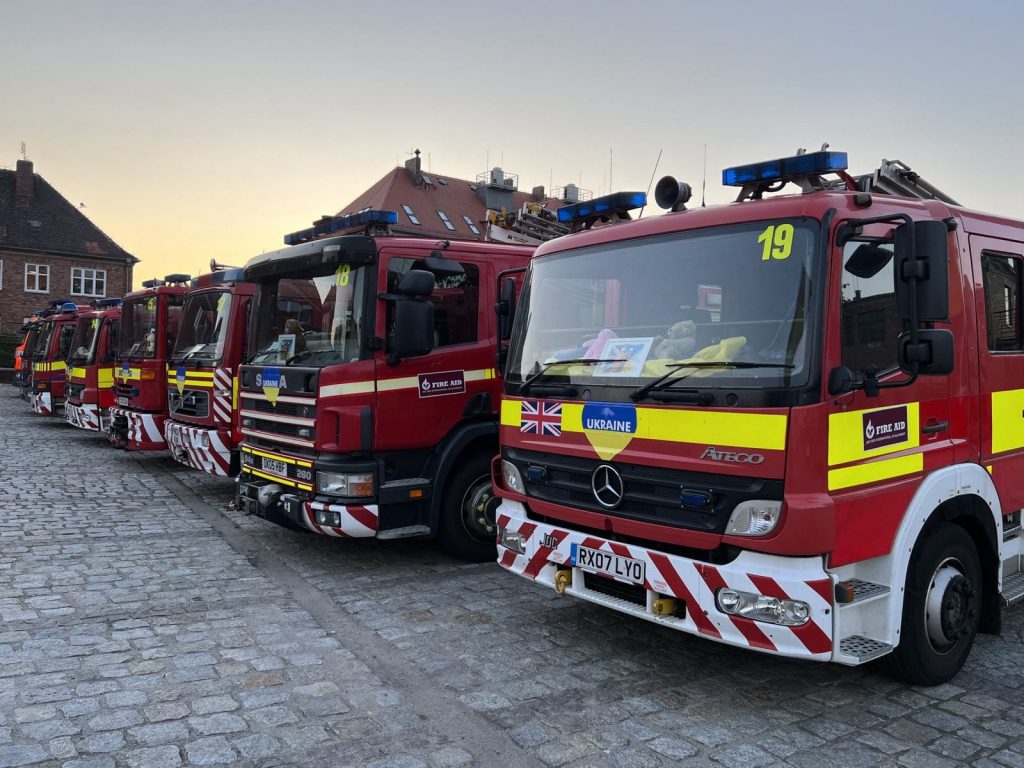 By this time, data from the Ukrainian Ministry of Interior showed that 100 fire stations had been destroyed and more than 250 fire engines had already been lost. Even worse, those on the frontline of the fire service were in great danger – reports were coming in of firefighters losing their lives or facing life-changing injuries. It was clear there was still a desperate need for more help.

According to Chair of the NFCC, Mark Hardingham: “We continue to see horrific scenes unfold every day and this equipment will go some way to assist our Ukrainian colleagues as they continue with their biggest challenge to date, while putting their own lives at risk, with limited resources. Any help UK fire and rescue services can give, will be given gladly. Every firefighter and volunteer involved should be immensely proud of how their amazing work is making this a reality.”

FIRE AID and the NFCC, alongside the Home Office, continued daily contact with the Ukrainian SES, and requests for more help kept coming. Plans for more aid were quickly developed. A shipment of over 1,500 sets of PPE was sent by train in early April, followed by a second convoy, even bigger than the first, later that month. A third convoy then left in early May. In total, more than 60 fire vehicles have been donated and tens of thousands of items of equipment have already been delivered to the frontline to support the emergency services.

The donated equipment is now in daily use supporting firefighters, emergency services, and volunteers, battling together on the front line – dealing with fires and other emergencies to protect people and property as the invasion continues to devastate the country and threaten lives.

Oksana Romanukha of Impact NGO Ukraine, says: “The support that we have been receiving from peer firefighters in the UK is immense. From the first day of this terrible war, our partners and friends in the UK, FIRE AID and EASST, actively started forming a new convoy of fire and rescue vehicles, equipment, and protective clothing to transfer to Ukraine. Because new rescue units have been joining almost every day, ready to help, one small project became the UK’s biggest ever convoy, which was then surpassed by two more even larger donations of equipment and vehicles.

“On the Ukrainian side, Impact NGO has been proud to coordinate this project. Everything is to save the lives and property of people. I want to thank our long-time partners and all the firefighter supporting this work in the UK. You give us a reliable shoulder and it keeps us going.”

To donate to our work in Ukraine follow this link: https://www.justgiving.com/campaign/KeepUkraineFireFightersSafe