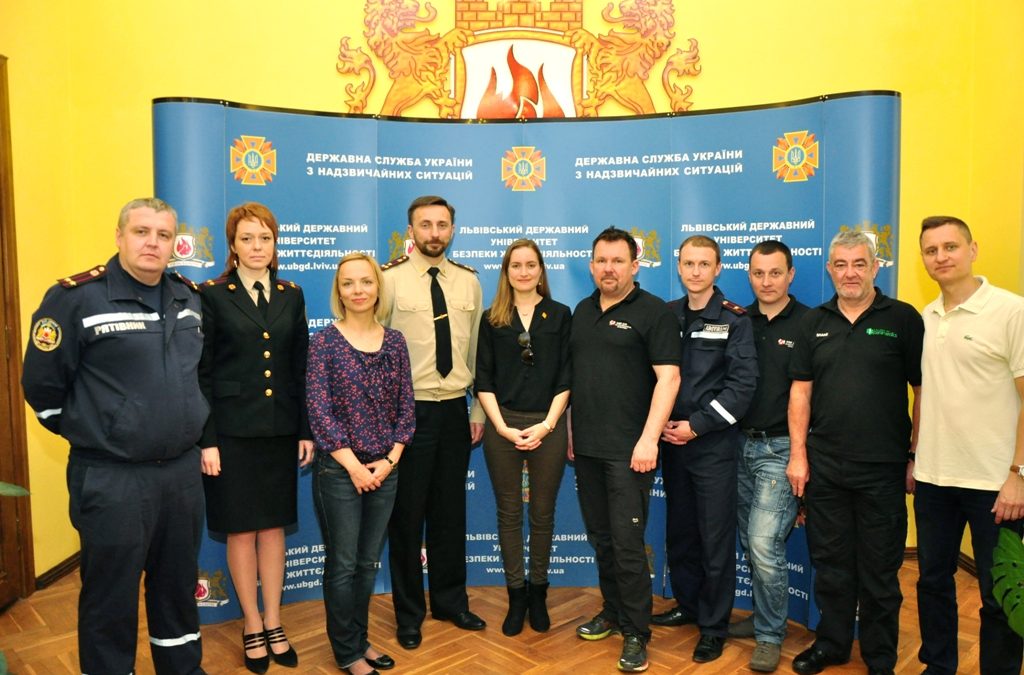 A team from EASST and its local partner organisation in Ukraine, Road Safety Support Foundation (RSSF), held a series of successful events at the invitation of the Lviv University of Life Safety in Ukraine in late May 2016.

A team from EASST and its local partner organisation in Ukraine, Road Safety Support Foundation (RSSF), held a series of successful events at the invitation of the Lviv University of Life Safety in Ukraine in late May 2016. The core purpose of the visit was to encourage and discuss partnership working among agencies in order to reduce the high number of road deaths and injuries – an increasing but preventable burden in Ukraine which is estimated to cause an annual loss to the economy of nearly €4 billion. 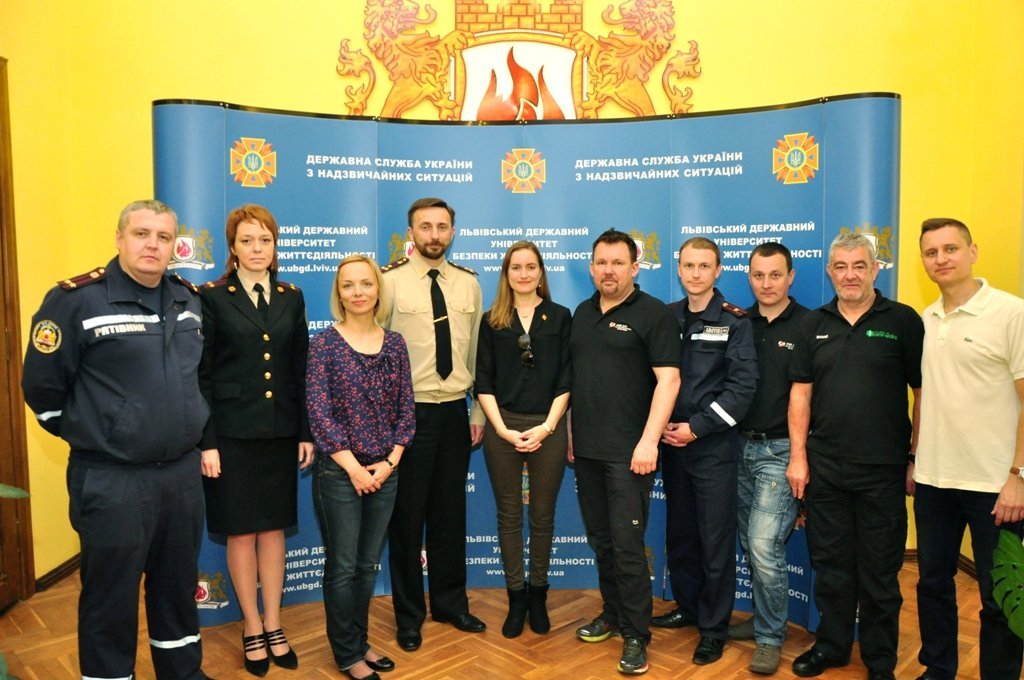 A roundtable event started the discussions with representatives from the police, fire and ambulance service, the local authorities, local road safety organisation RSSF, and relevant representatives of the University which provides training for the State Service for Emergency Situations of Ukraine. After a warm welcome from the Vice Rector to the guests, Julie Utting provided an overview of the global road safety context, also talking regionally about EASST’s work and sighting examples of successful partnership working in the region and activities to reduce road deaths. 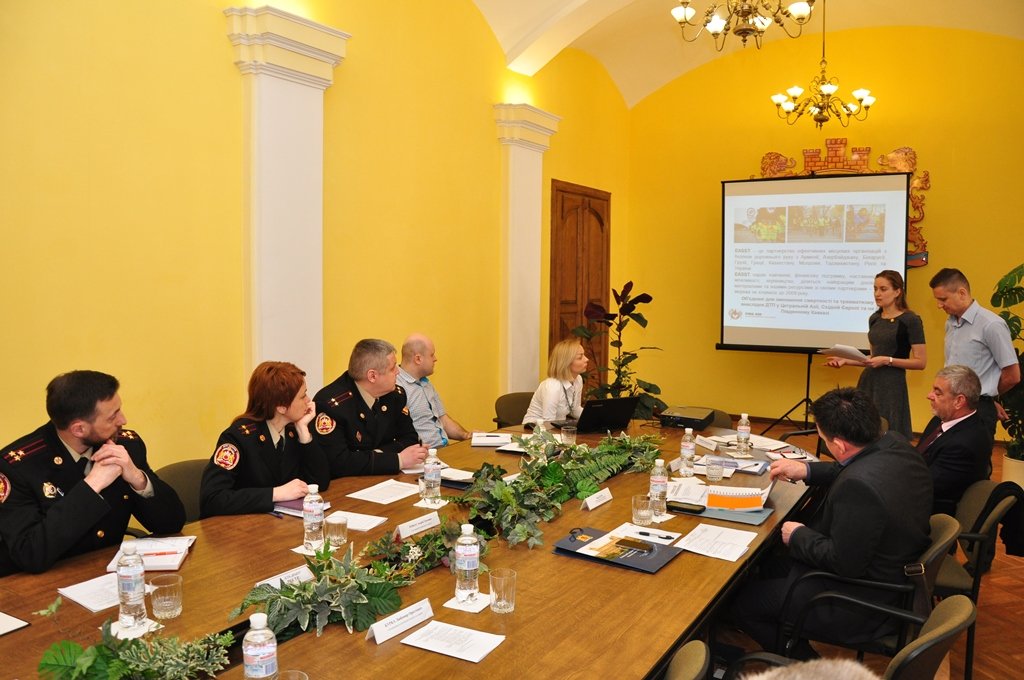 As Partnership Manager of Kent Fire and Rescue Service, Mike Pitney spoke next about the Kent example of partnership working and how it has achieved casualty reduction, emphasising the importance of joint training (which currently does not take place in Ukraine) and answered questions about the principles of joint working and how this is conducted in the UK. The roundtable participants, led by Mykola Sychevskyj Deputy Chief of the Dept for Vehicles and Firefighting Techniques, drew up a draft action plan on how different agencies can work together and detailing their responsibilities. Currently each agency has its own agreed action plan e.g. to respond to a road traffic collision, but no joint agreement or training programme currently exists. A joint working group was established with named representatives from the police, fire, and ambulance services, Road Safety Support Foundation, and the local authorities, led by the University to continue vital progress in this area. 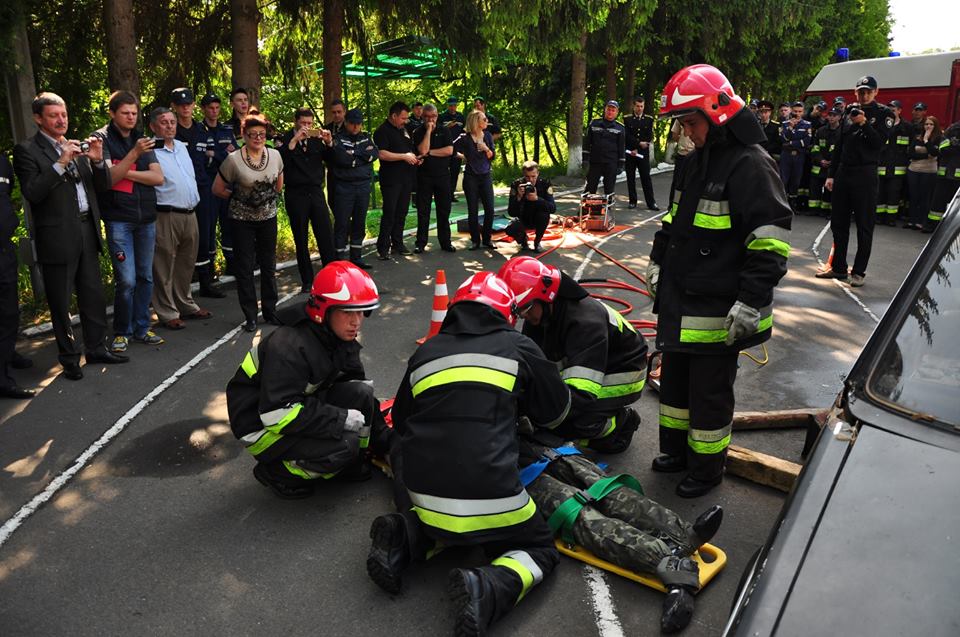 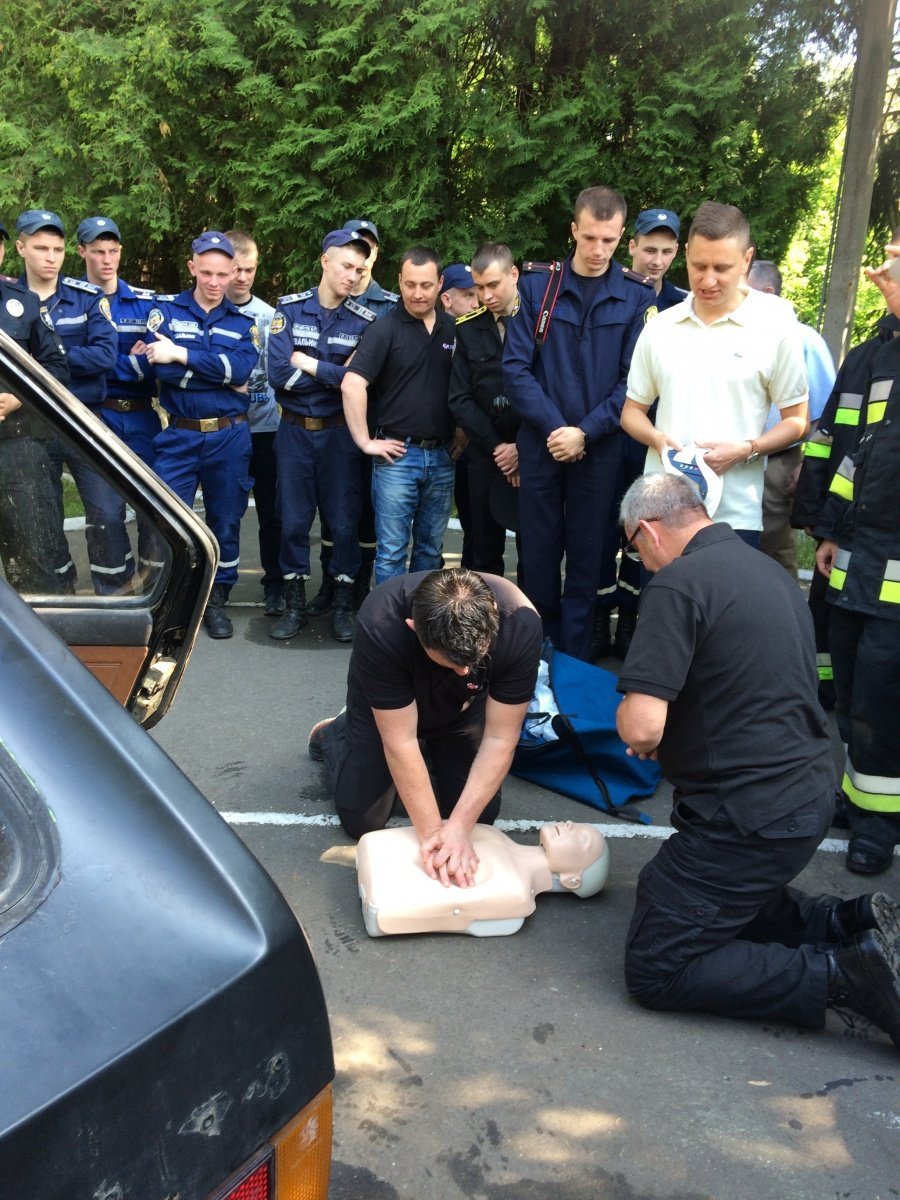 University firefighter trainees, the police, Mike Pitney and Shane Williams conduct an interactive exercise to discuss how multiple agencies can work together to prioritise the casualty

To demonstrate one of the reasons why partnerships are vital to casualty reduction, an interactive scenario took place with crews demonstrating how they would respond to an RTC. Mike Pitney and Shane Williams provided feedback and highlighted where joint working arrangements and a shared focus on the casualty would help to save life. The police in attendance highlighted that this was the first time such an activity had taken place. 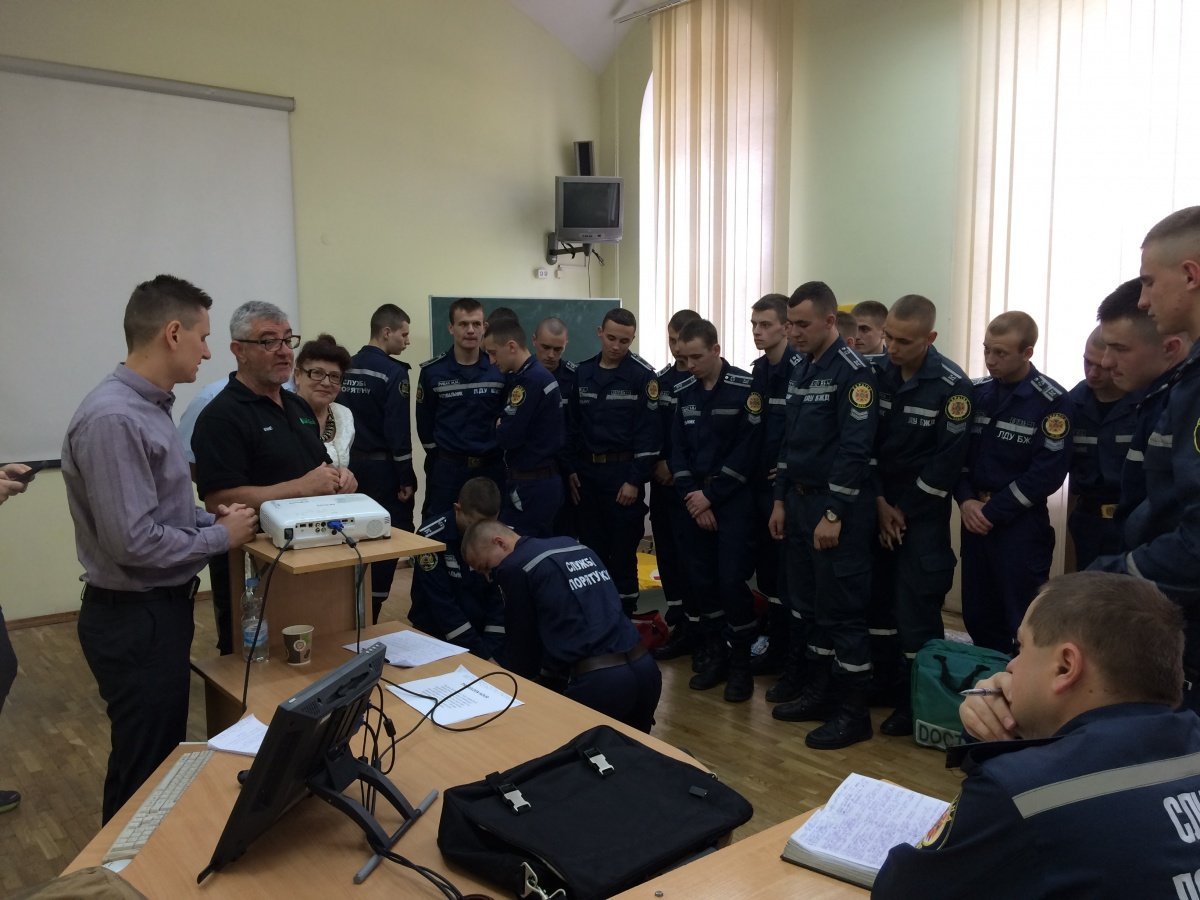 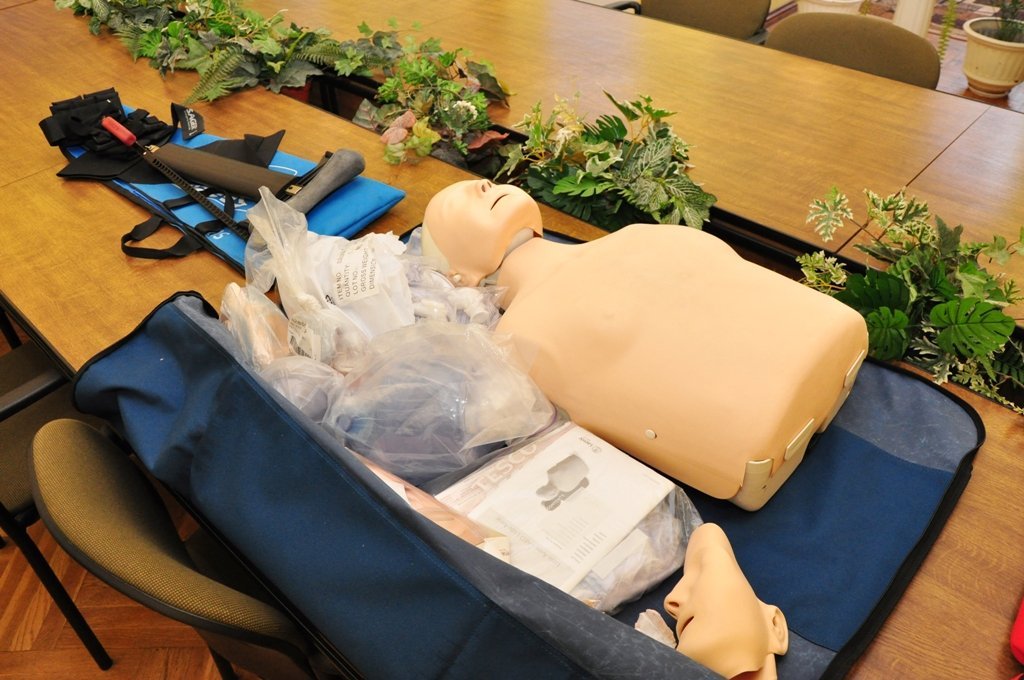 To facilitate donations of medical aid, Shane Williams delivered first aid training and answered many questions about first aid and trauma care in the UK, particularly at the scene of an RTC. This further facilitated discussions on joint working and responsibilities. The team were joined by Alex Geraimovich of Korosten Fire Station who spoke at the University about his crew’s activities regarding community safety and preventing fires and road traffic collisions. The team spent an afternoon at Korosten Fire Station, where UK fire appliances are operational, and conducted first aid training and donations with the crew as well as a discussion with the Chief regarding partnership working and the developments in Lviv. 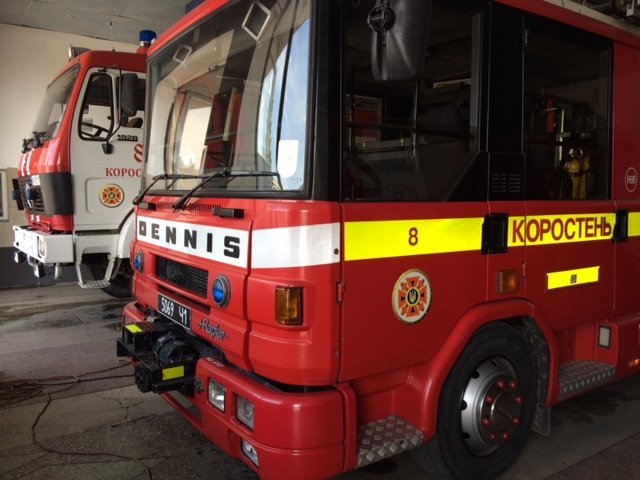 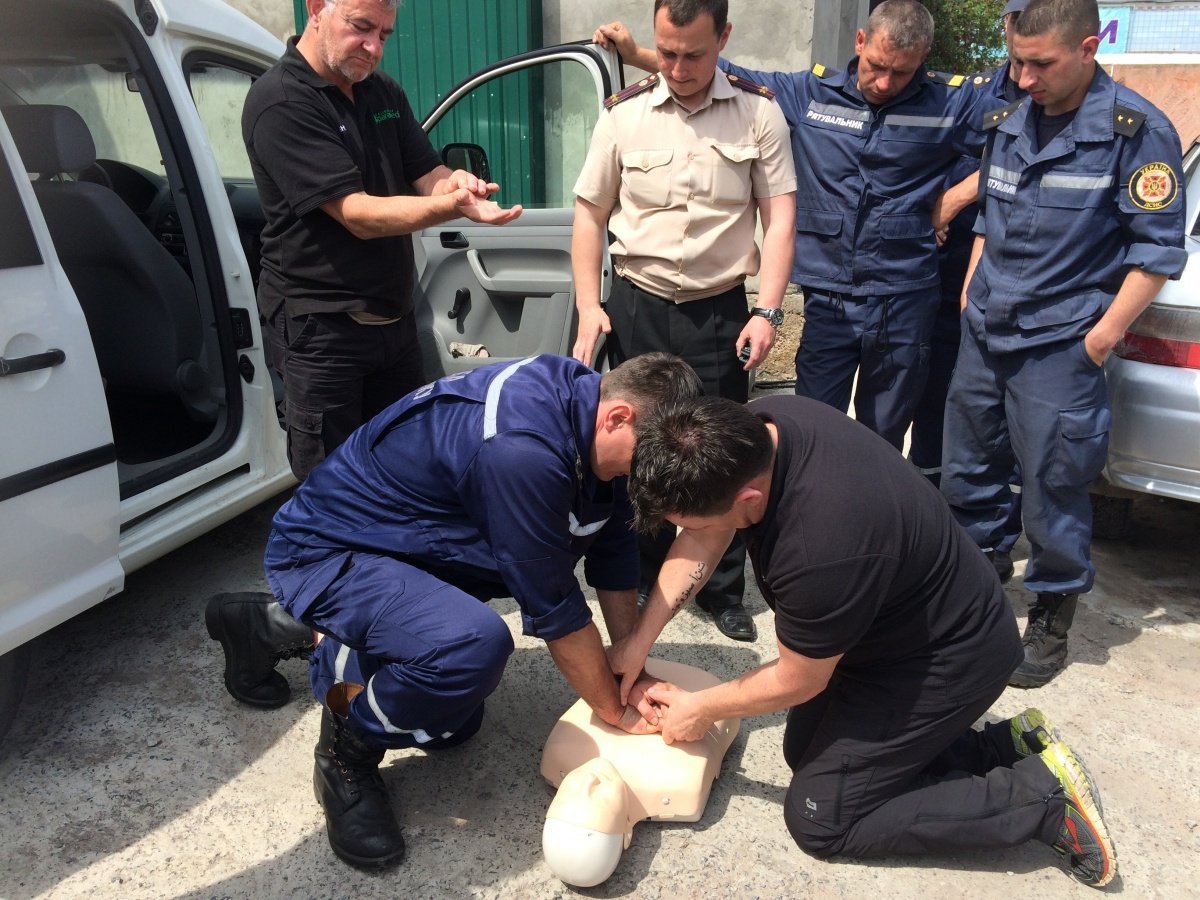 An official signing took place with the Vice Rector of the University in recognition of the EASST donations of aid to the University at which Julie Utting spoke about the growing partnership between EASST and the University and the successes of the week. 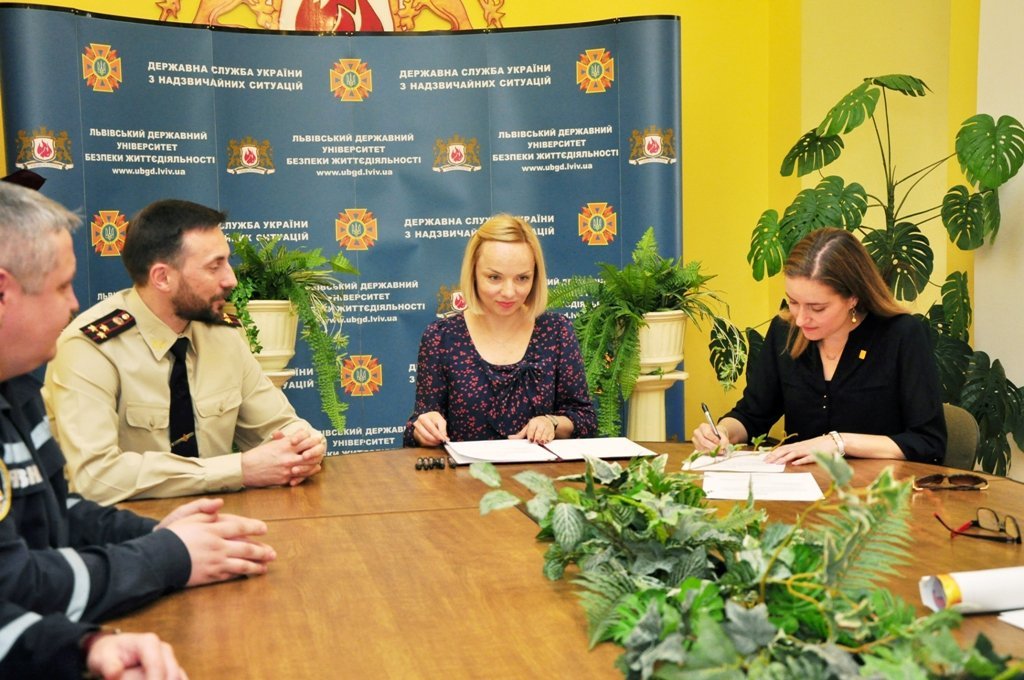 Further updates regarding EASST’s cooperation with University and the development of the joint working group will be published on the EASST website in due course: www.easst.co.uk