Following Alfred Wilson and Michael Pitney’s appointment as FIRE AID Honorary Members in November 2019, we are delighted to announce these two key figures have now taken on new roles as Trustees.

During our 2020 Annual General Meeting Trustees Ron Morley and Adrian Brown stepped down from their positions. FIRE AID would like to take this opportunity to thank both Ron Morley and Adrian Brown for their many years of service as Trustees. Ron has been instrumental in leading our projects in Tajikistan and Adrian has led our ground-breaking work on fire and community safety in refugee camps across Africa. Both will continue their active roles within FIRE AID.

Ron and Adrian and were replaced by Alfred Wilson of FIRE AID founding member Staffordshire Emergency Services Aid Association (SESHAA) and Michael Pitney of Kent Fire and Rescue service who were unanimously voted in by our members. 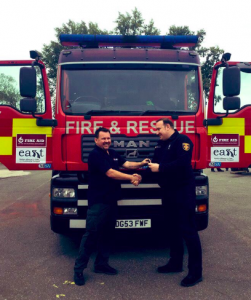 Michael Pitney is a Collaboration Station Manager at Kent Fire and Rescue Service; his role includes building partnerships with the Police and Ambulance service to ensure successful collaborations. Before this Michael served in London Fire Brigade bringing his number of years in service to 22. Michael is involved in multiple charities and has raised thousands of pounds for numerous charities through organising events and encouraging project sponsors. Michael is particularly passionate about supporting fire and rescue services overseas, and has worked with other FIRE AID members to deliver projects in Tajikistan, Moldova and Ukraine.

Michael is particularly passionate about supporting the fire service in Ukraine where he has worked for the last 8 years to deliver training and modern equipment to a fire service, which is vastly underequipped. His work in Ukraine includes the donation of hundred of thousands of pounds worth of second-hand equipment alongside five training programmes including specialised training on RTC and BA. Michael is personally responsible for providing over 200 Ukrainian firefighters with modern personal protective equipment meaning they are now able to carry out their roles safely and professionally.

Alfred Wilson retired from Staffordshire Fire and Rescue Service in June 2009 after 30 years service. Throughout his time with the fire service he served as an Area Commander but held several other roles such as Chair of the Road Safety Partnership and instructor roles in road traffic collision (RTC) and Breathing Apparatus (BA) at Staffordshire fire and rescue service training centre. Alfred also provided voluntary project management for the Institute for Fire Engineers and helped with the organisation of their International Conference and Exhibition in 2005. 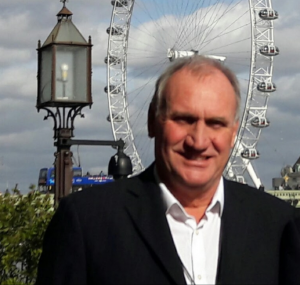 Alfred’s passion for international aid began in 1994 when he joined SESHAA, where for a long time he was the Chair as well as project managing multiple overseas missions. The first of which was a fact-finding mission to the Volograd Fire Service in Russia. Following this Alf has led missions to Bosnia, Albania, Malawi, Poland, Uganda, Kenya and Tajikistan where he has provided country reviews, equipment donations and training programmes. His work with FIRE AID partners in Tajikistan has led to over 100 lives being saved.

Both Michael and Aflred have demonstrated fantastic commitment, dedication, passion and collaboration throughout their years of delivering international aid. Both have worked together in Tajikistan and in the development and growth of FIRE AID as an organisation. We would like to take this opportunity to thank them both for their life-saving work.

The Scottish Fire and Rescue Service makes its first equipment donation to FIRE AID.
18 May 2021