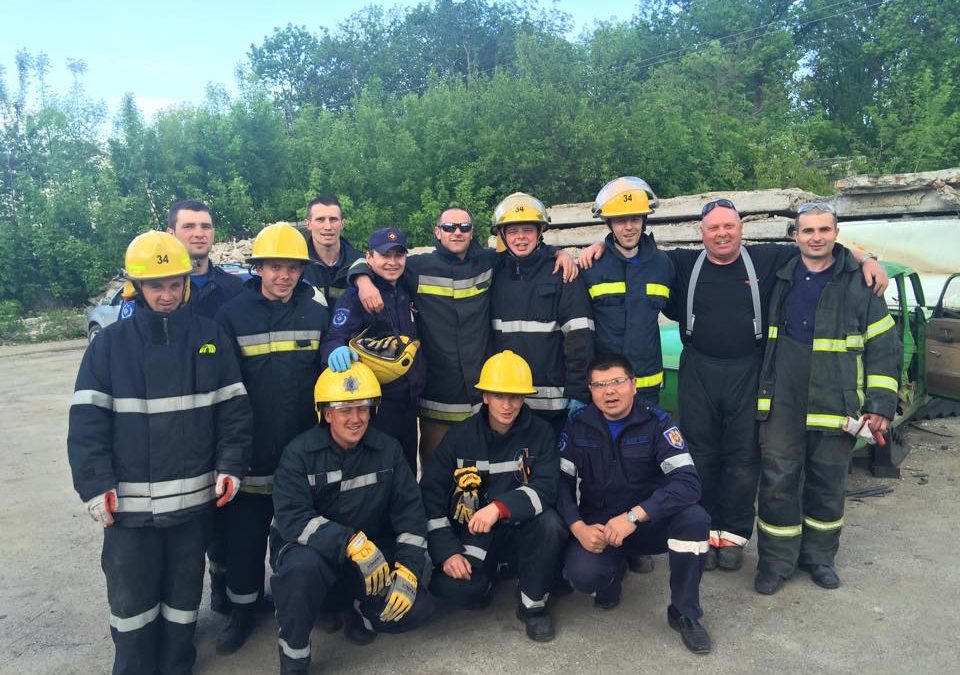 An alliance of UK organisations have continued their effective partnership to deliver fire and rescue aid to the Republic of Moldova – a country with limited fire and rescue capability and the third highest road fatality rate in Europe.

Following successful project deliveries in May and September 2014, an alliance of UK organisations have continued their effective partnership to deliver fire and rescue aid to the Republic of Moldova – a country with limited fire and rescue capability and the third highest road fatality rate in Europe. The ongoing cooperation between the UK and Moldova and this vital project are made possible by continued support from the USA and UK Embassies in Moldova. 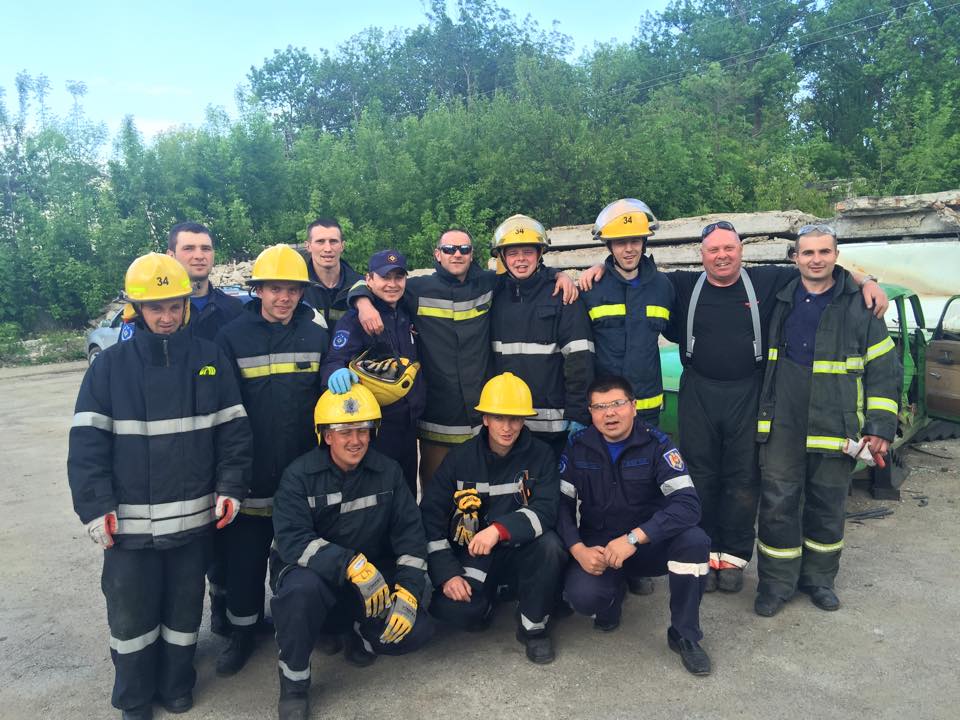 Happy to be back in Moldova: Operation Florian volunteers Graeme Samuels and John Haizelden with firefighters in Orhei after a day of RTC instruction 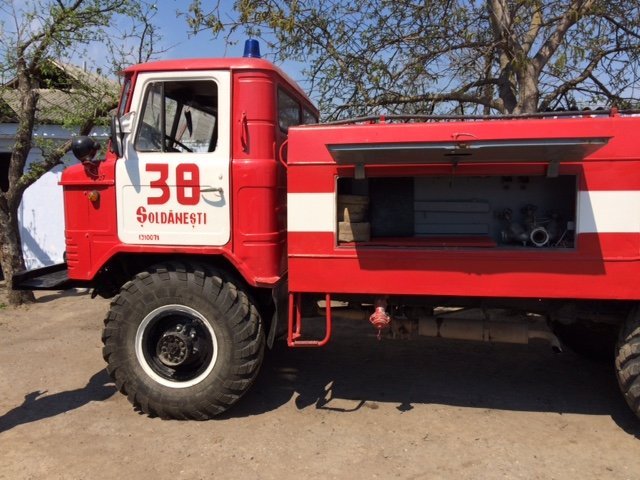 A team of 39 people participated in the complex project delivery within Moldova over a period of 3 weeks, with many other volunteers involved in the preparation phase back in the UK. Volunteers and equipment were recruited and sourced from across the UK including: East Sussex FRS, West Sussex FRS, Kent FRS, London Fire Brigade, Surrey FRS, Mid and West Wales FRS, Greater Manchester FRS, Derbyshire FRS, Buckinghamshire FRS, Hertfordshire FRS, Cambridgeshire FRS, Cheshire FRS, First Intervention Training Essex, Toyota Europe, Vimpex, Mfc Survival by Respirex, Yamaha UK, and BrightKidz, all of whom receive our thanks for their invaluable contribution.

The convoy en route to Moldova

For the convoy team, ably led by Florian’s Alan Smith, the journey started on 26th April at Crowborough Fire Station where the 18-strong team of driving volunteers began their 4 day journey across Europe. With some adventures along the way, and excellent hospitality at Wiener Neudorf fire station in Austria, the intrepid convoy team arrived safely at the Romania-Moldova border crossing point of Sculeni on 29th April after travelling some 1,600 miles (or 1,800 miles for the Welsh and Manchester contingents) through 8 countries. 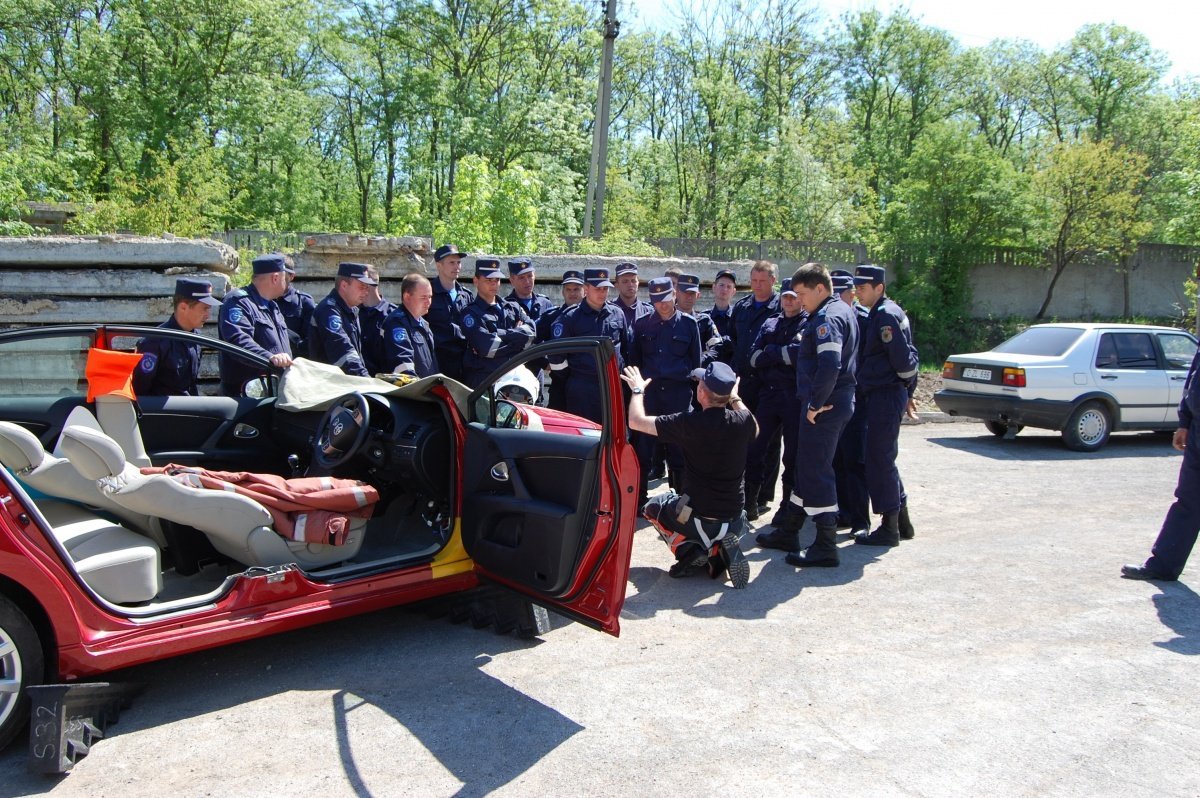 Following safe arrival of the convoy and preparation and transportation of the vehicles and equipment within Moldova, the two week instruction phase began, ensuring safe and sustainable use of the donated equipment for all crews and stations receiving aid. A team of 10 RTC and Trauma instructors led by Terry Bond – some in Moldova for the first time – delivered training for firefighters from Orhei, Soldanesti, and Rezina at the location of Orhei Fire Station. This also included familiarisation training on how to use the Transformer Car (pictured above) which is a reusable vehicle for road traffic collision rescue training, demonstrating a variety of space creation techniques such as glass removal, roof and door removal, dash lift, B pillar fold and removal. The uniqueness of the vehicle is that it can be reassembled and therefore of great value to countries such as Moldova where scrap cars are costly and the quality unrealistic. Three of the fire appliances are now operational in Orhei, Soldanesti and Rezina – responding to road traffic collisions, fires and other incidents. The fourth donated appliance is now operational in Comrat, in the region of Gagauzia, with 3 of the instruction team spending time at Comrat Fire Station to prepare the crews and vehicle for use.

Volunteers Trevor Funnell, Pup Upton and Rob Clark returned to Comrat to deliver training to crews receiving one of the UK fire engines

In a new development for the UK-Moldova partnership, a team of 4 water rescue instructors led by Simon Evans delivered training to some of Moldova’s water rescue units to accompany donation of a rescue boat from Kent FRS. Due to its hard floor (as opposed to Moldova’s current boats requiring inflation), the UK-donated boat and its accompanying trailer provides Moldova’s water rescuers with greater flexibility and speed in responding to incidents. This is particularly necessary given Moldova’s large quantity of lakes used predominantly for leisure and ice fishing. 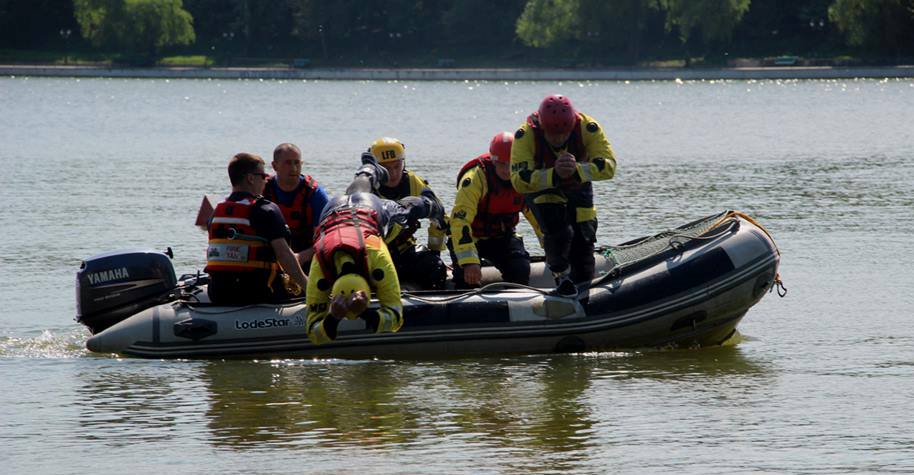 First time Florian volunteers – Chris Byng (pictured), Si Evans, Emma Carr, and Alastair Hislop – conducted the water training. Without the continued support of volunteers these projects would not be possible

Some 77 Moldovan firefighters received training, marked by official pass out parades, key handovers, and demonstrations on 13th, 14th and 15th May throughout Moldova. On 15th May, a demonstration of road traffic collision, firefighting and trauma care techniques took place, along with use of the Transformer Car, at the public square in Orhei. This was well attended by all instructors and students, members of the public, UK Ambassador Phil Batson, Don Carroll and John Bozicevich of the USA Embassy, the Deputy Minister for the Interior of Moldova Veaceslav Ceban, and senior representatives of the Dept for CPESS of Moldova, who were treated to an array of techniques on display by firefighters and music by the police service brass band. Project sponsor, Don Carroll, spoke about the impact of the work being delivered and how its effectiveness is built by the time spent by the UK team in-country and the strong relationships built by the charities with the Moldovan fire service and its firefighters.

Keys for fire engines destined for use in Orhei, Rezina and Soldanesti were officially handed to crews and all students received certificates in recognition of the skills learnt. Certificates were also presented to Florian’s Matt Hitam and Bruce Hoad, and EASST’s Julie Utting, for their management of the project. 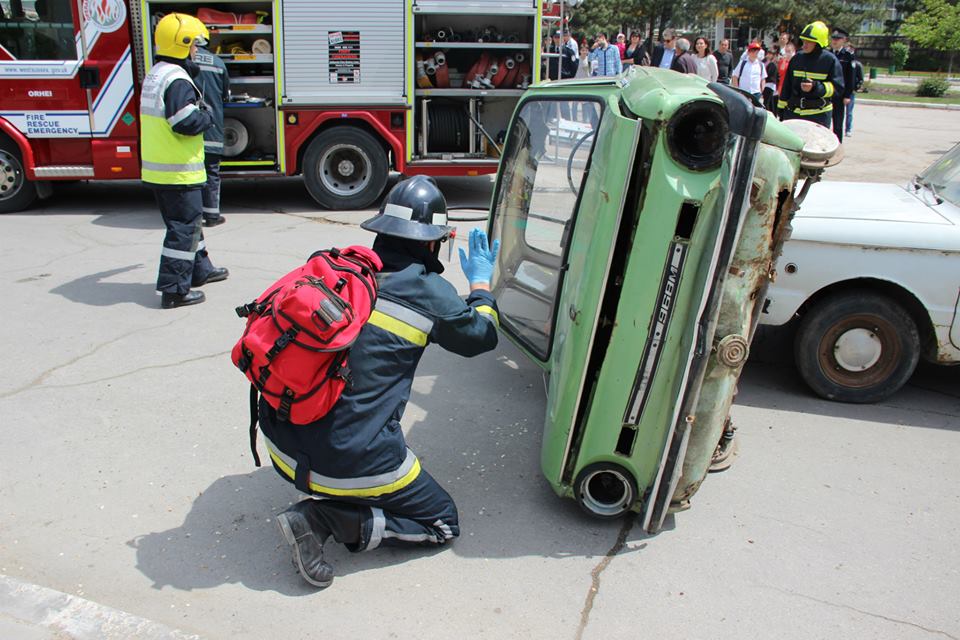 Moldovan firefighters demonstrate their skills at the public demonstration in Orhei

On 13th May the crew at Comrat were joined by the British Embassy’s Deputy Head of Mission, Neil Martin, who viewed first-hand the value of the project and officially handed over keys to Comrat’s newest firefighting appliance from the UK. 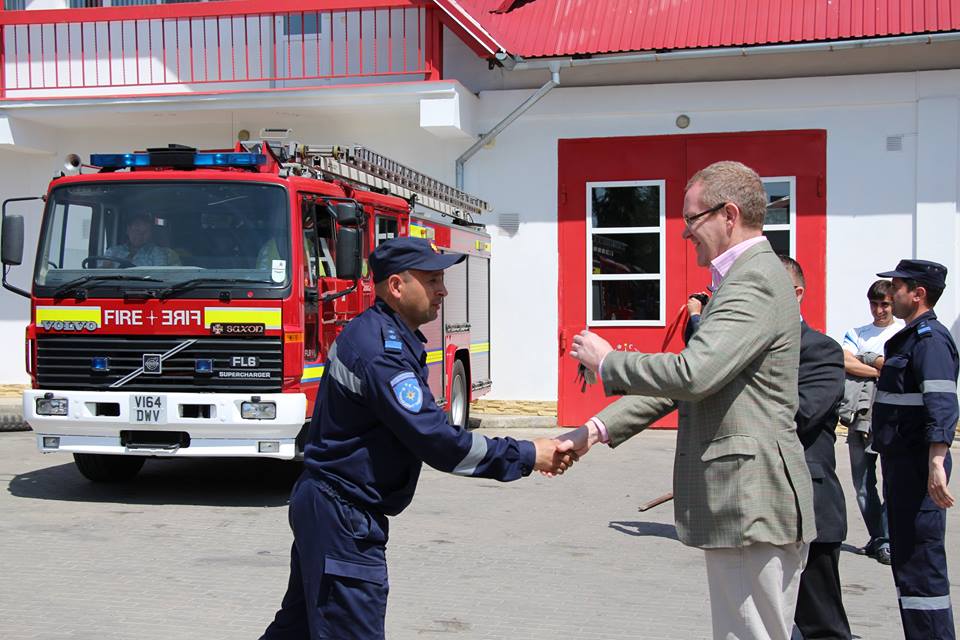 On 14th May, the Head of the Dept for Civil Protection and Emergency Situation Services (CPESS) Colonel Harabagiu presided over an excellent demonstration by the water team at Valea Morilor Lake. The students displayed a variety of water rescue techniques including use of throw lines, hose inflation, inflatable rescue paths and rescue boat operations, and each received a certificate in recognition of completion of the training course. 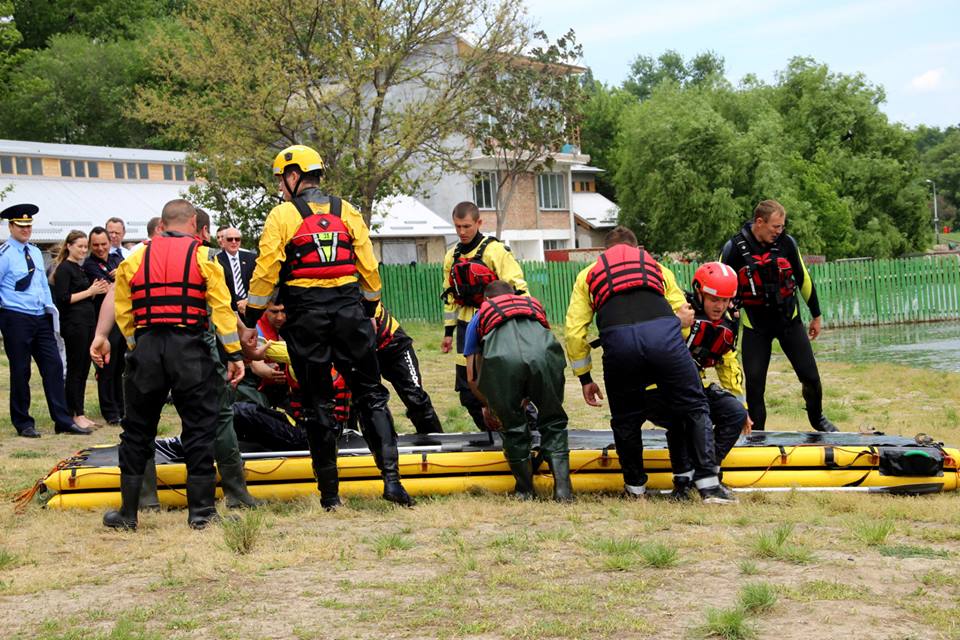 Another new element to the project involved an assessment of incident command procedures and fire investigation processes by UK experts Adrian Brown and Mark Watson who spent a week in Moldova in cooperation with the Dept for CPESS exploring these issues. Training in these two key areas may be delivered in the future. On this theme, and after discussions between surgeon Dr Bassel El-Osta and Ambassador Batson, an idea formed to bring together multiple stakeholders involved in the preservation of live. This was achieved by way of a seminar hosted by the UK Embassy and assisted by the UK project team. Representatives of Moldova’s emergency services, the Ministry of Health, Dr Bassel El-Osta and others took part. On behalf of the UK team, expert Adrian Brown delivered a presentation on JESIP (Joint Emergency Services Interoperability Programme) which improves the ways in which police, fire and ambulance services work together at major and complex incidents. The event provided the opportunity for Moldova’s emergency services to share information about their roles and procedures and how they work together. It is hoped that development in this area will continue in later phases of the project. 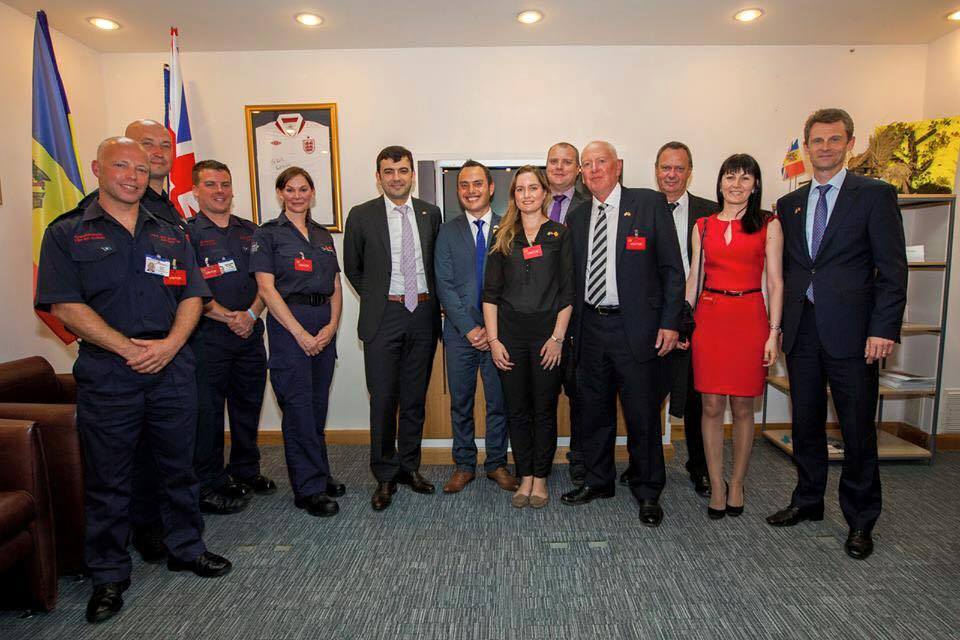 The project team were pleased to contribute to the UN’s third Global Road Safety Week and the #savekidslives campaign whilst in Moldova. This involved delivering fire and road safety messages to children of primary and secondary school ages at several schools in Orhei and Chisinau as well as hands on demonstrations of the UK fire engines – much loved by the children. 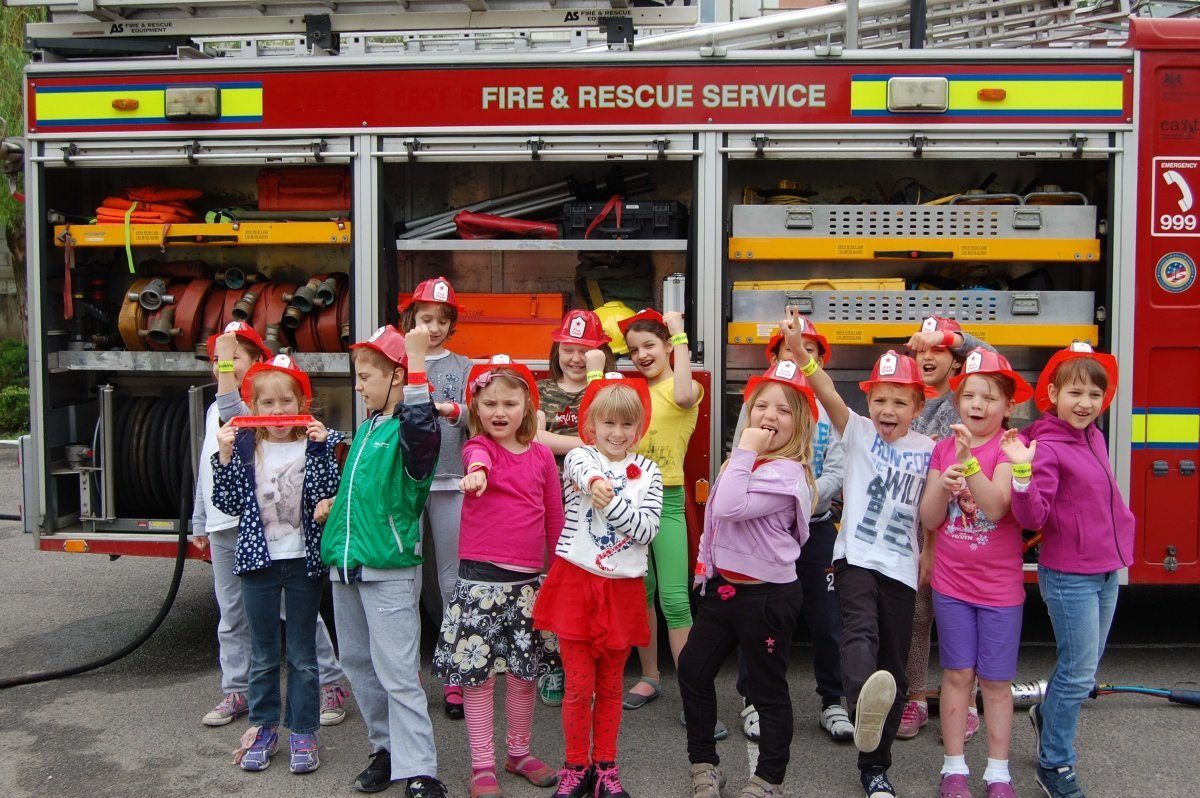 With EASST’s partner organisation, the Automobile Club of Moldova, the National Patrol Inspectorate, REPEMOL and Chisinau school pupils, the team hit the streets of Chisinau on 7th May to further promote #savekidslives. With the campaign banner fixed to a UK fire engine, the group drove through Chisinau and handed out high vis gifts to children to promote safe road use. The event was supported by Ambassador Batson who signed the Child Declaration stating that “The world needs to act decisively to cut the number of road fatalities drastically. Moldova can play its part and volunteers from the UK are helping it to do so”. 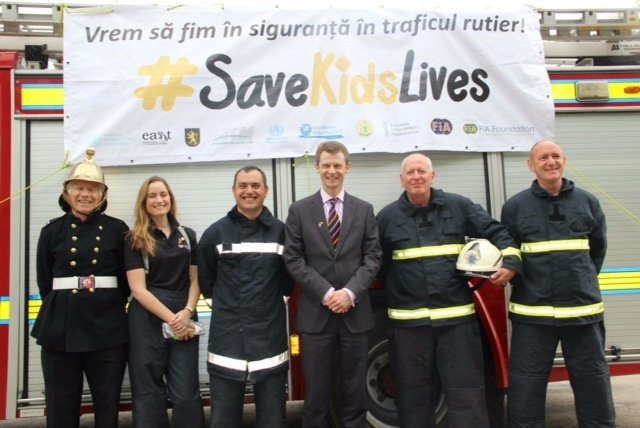 The team were joined for several days by representatives of the UK Rescue Organisation who met with relevant stakeholders in order to progress with the development of Moldova’s inaugural rescue challenge competition. The outcome of their stay in Chisinau was positive with plans now being developed for Moldova’s own internal competitions and its membership to the World Rescue Organisation. This helps to ensure that vital skills learnt during the UK delivered training are maintained. 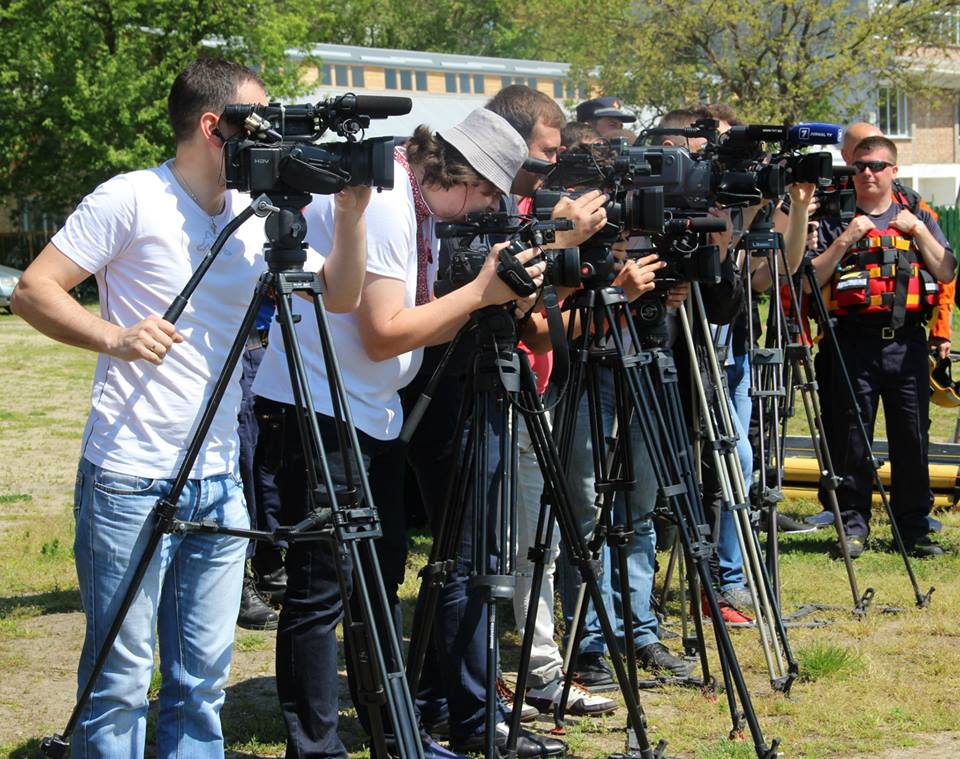 The project received a large amount of media coverage over the 3 weeks and members of the team were pleased to meet the Prime Minister on two occasions. Further photos and media links can be found on the CPESS Facebook page:  https://www.facebook.com/dse.md/timeline 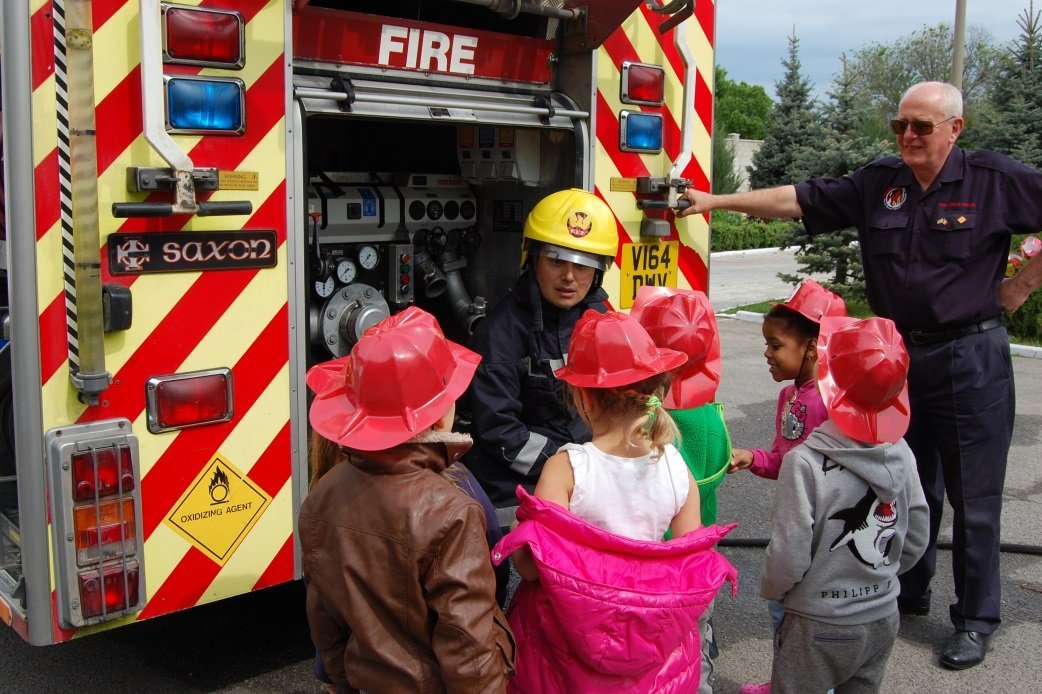 Matt Hitam gives an interactive tour of one of the UK fire engines for children at the QSI School in Moldova. School visits and raising public awareness are key parts of the project delivery

This ongoing project contributes to the aims of both the UN Decade of Action for Road Safety 2011-20 by improving the capabilities of responders and therefore increasing the chance of survival during a road traffic collision, and the UNISDR Hyogo Framework for Action by building resilience and the preparedness of communities to cope with emergency situations. The project will continue to reduce incident response times as well as ensure that personnel with the right skills and the right equipment are able to save saveable lives.

In addition to those mentioned in this article, Matt Hitam of Operation Florian and Julie Utting of EASST would like to thank the following for their contribution:

All volunteers involved in the organisation and delivery of the project
Colonel Harabagiu, Oleg Malashevsky, and colleagues at the Dept for CPESS Moldova
All local fire crews who undertook the training and translators who facilitated this
Ambassador Batson, Irina Nanu and all at the British Embassy Chisinau
Don Carroll, John Bozicevich, and Radu Foltea at the USA Embassy Chisinau
EASST Advisor Serghei Diaconu and the office of the Prime Minister
All at Wiener Neudorf Fire Station in Austria
Kumail Jetha at Endava, Chisinau
Dr Bassel El-Osta
Mike Pitney
EASST partner Tatiana Mihailova and the Automobile Club of Moldova
All at the Times Rooms Hotel Chisinau
P&O Ferries
Ion Rotari at the QSI International School